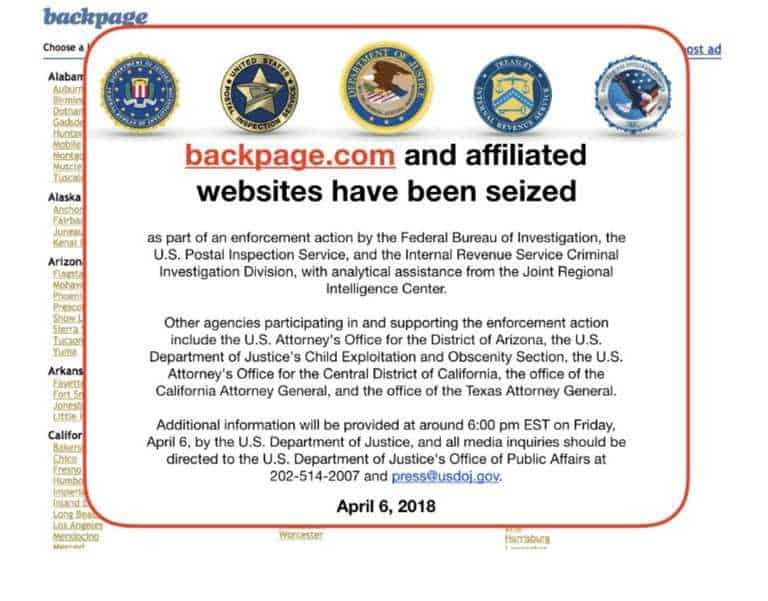 Backpage is Closed Down

Great news for the escorting industry as Backpage is closed down.

All we need now is for Viva Street to go the same way and it will be the perfect present for all involved.

Why do we think that?

Let’s look at both Backpage and Viva Street under the same light to answer this very simple question.

Both of these companies that had bottomless pockets for advertising were making it harder and harder for genuine providers, be they independents, agencies or directories to compete with them on a level playing field.

Backpage had a ‘freemium’ version where you could just use lineage adverts to advertise and then pay a premium price to advertise using pictures.

Viva Street have taken this one step further, where you initially need to pay for photo adverts (in the escorts and massages section) and then get stumped for carousel placements, pretty stickers and ‘auto bumping’ to elevate your advert to higher than page 35.

Backpage is closed down due to various money laundering and human trafficking charges, which we cannot comment on as we never really used it.

However we DID use Viva Street at one point, and pulled out of their clutches when they point blank refused to put adverts in the correct categories, allowing trafficked street-walkers, independents and agencies ALL to advertise under ‘agencies’.

This, of course, proves our above reasoning that you need to purchase carousel placements and pretty stickers to reach higher than page 35 as you will be tussling for a position with a trafficked street-walker.

With that in mind, we see no difference between Backpage and Viva Street, as they both did the same thing as regards ‘providers’ – it just stings a little that we were conned into advertising with the latter.

We look forward to the United Kingdom authorities getting off their arses and doing the same thing to Viva Street that the FBI did to Backpage in America!

The item ‘Backpage is Closed Down’ first appeared on Midlands Maidens Nottingham Escorts in the NEWS section. Port City Daily
We have a sex-trafficking problem. The numbers don’t begin to tell the story
Nottingham Escorts News

Sploshing for Beginners
Sploshing is a 'wet and messy fetishism where copious amounts of a substance are applied to the naked skin, or face, or clothing'.
Trafficking gang jailed for more than 40 years
We've been keeping a close watch on the reports about this trafficking gang in Nottingham, and now the verdicts are well and truly in.
Corona Virus Hoax?
By now, everyone that hasn't been in a deep sleep for the past year will know about COVID-19. We are now calling this out as the Corona Virus Hoax.