Community Service is that aspect in life that is usually passed down to you by a judge, as ‘unpaid work’ that you need to do for committing a crime.

We see it though, as a way to expand upon our Community Forum, which has taken a few knocks just lately through many of the posted videos having been ripped off due to various websites being forced to close.

With it being a bank holiday Monday right now, which is a notoriously slow time for punting, we thought that we’d show you what we’ve been up to in the month of August.

‘That Peter Kay Thing’ was a spoof documentary series that aired on Channel 4 in 1999.

Featuring characters that would go on to far greater things, the show lasted just one season but was an insight into what would follow later.

That Peter Kaye Thing - The Services
The Nottingham Escorts Forum - The Mothership.

When the Wind Blows in our minds, is an essential film that every child should be forced to watch as a part of the school curriculum.

Originally written by Raymond Briggs, and concentrating on Jim and Hilda Bloggs’ retirement, when the unthinkable war happens. 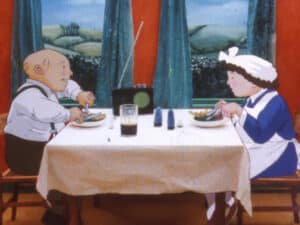 When the Wind Blows
A little bit of Cartoon Scariness with the feature that EVERY child ought to be made to watch, to show them what happens if the nuclear bomb is droppe...

3) Dream Theater – The Count of Tuscany.

The Count of Tuscany is a full-blown and unashamed version of a Dream Theater track, that we managed to find on Facebook of all places.

By-passing the copyright grounds issue, it is presented on our forum in all of its glory!

Dream Theater - The Count of Tuscany
Super song from the Dream Theater 2011 tour, at the V Festival in London.

4) The Wall Live in Berlin.

The Wall Live in Berlin is one of the most extravagant and star-studded shows of recent times and was shown to all spectators at the concert for free.

Starring Roger Waters (ex Pink Floyd) and a cast of thousands at the demolition of the Berlin Wall.

5) Steve Vai – Where the Wild Things Are.

Where the Wild Things Are was the name of the Sound Theories tour by Steve Vai.

Watch in awe as the maestro performs a full 2+ hours concert before a sold-out audience.

Steve Vai - Where the Wild Things Are
The Nottingham Escorts Forum - The Mothership.

The Damned United is a sports film starring Martin Sheen and Timothy Spall.

Concentrating on the early career of Brian Clough, the film shows how he won the championship title with Derby County and his unhappy time at Leeds United, where he reigned for just 44 days.

The Damned United
This film revolves around the football club pinnacle of British Football - Leeds United.

We hope that we’ve brightened up your soggy Bank Holiday Monday with our latest offerings from the Forum.

Keep in touch for more news from our Community Service posts!

Out of Town New Areas
Regrettably, we have had to add a few more out of town new areas to our pricing schedule, due to the costs involved in reaching them.
Newest Member of our Team?
In the run-up towards Christmas, we present our last recruitment drive of the year to find the newest member of our team.
A Few Points
We've got a few points that need to be either redressed or ignored, both technical and manual. Here then are the good points and the bad.

MaidensOne · 6 days ago
@Maidens_One
https://t.co/RnTb0WT9t0
View on Twitter
0
0
Load More
Join us on…
Search by Relevanssi
Post/Page Categories
Latest Posts
Random Posts
Trending Today:
Call the Midlands Maidens Nottingham Escort Agency by phoning us on 07983-910-208
Call-girls and escorts in Nottingham, Derby, Mansfield, Leicester and the East Midlands.
Get In Touch
All payments made to girls working at Midlands Maidens are accepted on the understanding that you are paying for the girl's time and companionship only. Anything else arranged is by the mutual consent of two agreeable adults.