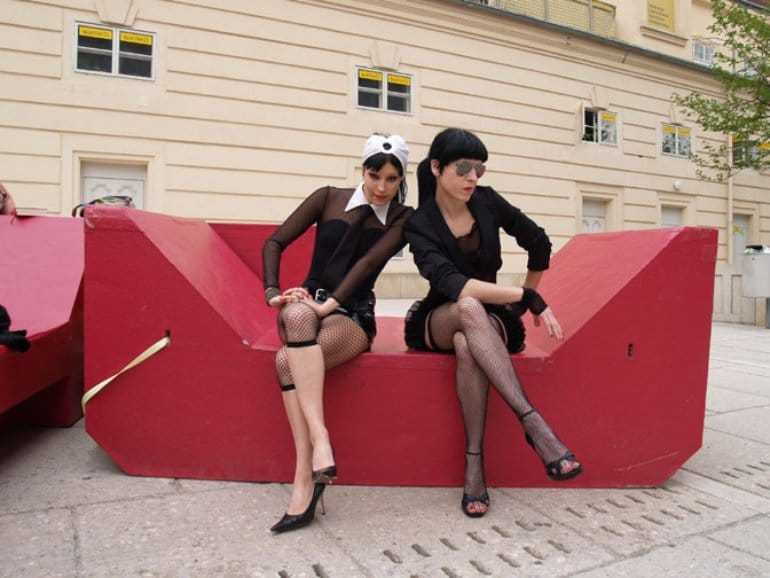 Dirty Princess is an electro-disco-punk band from Madrid – or at least they were until their break-up in 2015 through ‘personal differences’.

‘The Dirties’ were acclaimed as the goddesses of electronic body trash and caused a commotion wherever they played.

They also had their own line of merchandising which included T-shirts, G-strings, knickers worn by the two girl members of the band, leather bracelets and condoms.

All pretty raunchy stuff then, and we are pleased to include them in our Music Box.

One of the few videos we were able to find on any of the usual channels, this encapsulates perfectly what we look for in a Music Box post, and we hope that it meets with your approval – unless you’re a catholic of course :)

Here’s the video then – Dirty Princess with ‘Vigilan’:

We hope you enjoyed our trip into Spanish electronic synth-pop, and that the distractions were worth it!

Keep watching for more of the same from the Music Box.

[bctt tweet=”I’ve been watching some sexy nuns getting their kit off in the Midlands Maidens Music Box!” username=”MidlandsMaidens”]

This post was originally posted on Midlands Maidens Nottingham Escorts by the MUSIC BOX team.

Queen Adreena – Pretty Like Drugs
Queen Adreena - Pretty Like Drugs - The world is watching as I take my last breath The world is watching as I get undressed Coz I'm pretty like drugs
This Womans Work
It's back to the dystopian state of Gilead for this Music Box post, titled 'This Womans Work' as a homage to the wonderful scriptwriting and soundtrack.
Adam – Go to Go
We've got an interesting little song for you this time, from a Dutch girl-band called ADAM who perform their song whilst orgasming.